The “Like” button, it’s everywhere these days. From news sites to blogs and even brand sites, the World Wide Web is littered with these things. Although it feels like these little sky blue buttons have been around for ages, they were actually only launched in April… yes, April 2010! 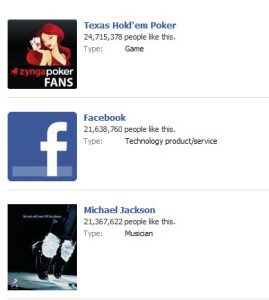 Even for Brand Pages, where it once was “Become a Fan” has now been replaced with Like. Do you see a problem here? Say you’re pissed about a particular brand and want to give it a good piece of your mind. But remember, you have to Like the page/brand before you post anything juicy… what irony! Or you can click on the Unlike button that appears after you’ve liked a page… in your face sucker!

So what’s the most Liked thing on Facebook? Going by all the Like-fest from Facebook within Facebook and around the web, it seems natural that Facebook is the royal Like-ness. Not quite. That honour goes to Texas Hold’em Poker and only then followed by Facebook. And check out Michael in a close third!