What happens when you invite a bunch of people, let them sample your product and allow them to speak their mind? Let’s see…

This month marks my third year as a fulltime freelance copywriter. And if you add the 13 odd years I was an agency-employed copywriter, you can say I’ve seen many groundbreaking campaigns.

From the era of experiential marketing and digital 2.0 to current industry buzzwords such as disruptive marketing and hashtag-strategies; the ad game has evolved to the point of mutation.

But no matter what you do, people will continue to form their own opinions – be it positive or otherwise – about a product or service.

The blind ‘taste test’ for Laphroaig (don’t ask me how to pronounce it) reveals an important aspect of consumer behaviour.

They prefer to think for themselves.

We as advertisers can only mould consumers to think a certain way via a concept, proposition or message. But often have no control of how they might interpret our messaging or imagery.

In the case of Laphroaig, they embraced the opinions of their focus group – made up of people who may or may not have consumed the product previously – and went on to create print ads without filtering even the negative comments. 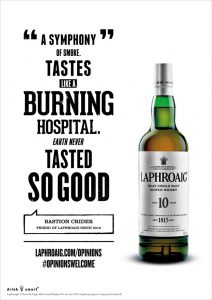 How would a burning hospital taste anyway? Intrigued I am... 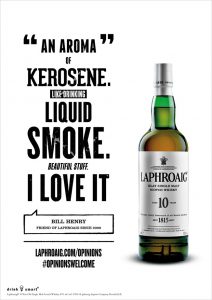 Now, that took some balls.

Granted the product is an intoxicating beverage and there is a certain degree of creative freedom afforded.

But come on… ‘tastes like burning hospital’ as part of a headline? You got to give the people at Laphroaig some props. There are more versions of the print campaign actually, which I urge you to check out.

And the best part, the agency’s copywriter didn’t even have to think of a catchy, punchy and juicy headline; the consumers did it.

Now I want to do a focus group-inspired campaign too… anyone?

I never studied copywriting. I mean I have learned the craft on-the-job, but have never sat in a classroom studying to be a copywriter.

In fact, I only decided to venture into copywriting towards the end of my college years. Yes, I actually stumbled into this line of work.

Now, there are few colleges churning out copywriting diploma-totting graduates raring to hit the ground running with stacks of very creative portfolio pieces. 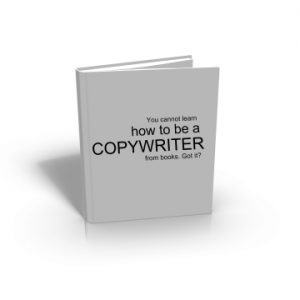 This could seriously be a hit e-book!

Certainly, the bar has been raised, because I got into the industry knowing nuts about advertising or how to craft a clever headline. Heck, I wasn’t even worthy of a computer on my first copywriting job. I had to handwrite everything onto loose A4 sheets, while constantly referring to my dictionary.

That was a long, long time ago.

But that was the case with most people in advertising back then. We loved to draw, write, or think, and figured we wanted to get paid for it. Not many of us got into agencies willingly, and not many survived for too long either.

Copywriting graduates now though know exactly what they are getting into. At least I hope they do, because the first few years can be rather challenging, to put it very mildly.

But here’s the thing, according to Sanam Petri, an Associate CD at R/GA London:

“because today’s advertising world is largely driven by accolades and awards, many communication schools are churning out kids who think like creative directors, not kids who just love to write. Students are coming into the agency with their sights trained on one thing: being the one to come up with the one game-changing idea that puts them on the map. But what are the implications of hiring an entire generation of thinkers who can’t do?”

While we should not generalize that all copywriting graduates are useless douches, I totally agree that most of them do not want to get into the nitty gritty of the industry. It’s all about big ideas and creative execution instead of learning the ropes and honing the craft.

No wonder good, dedicated writers are hard to come by these days. Blame the colleges. 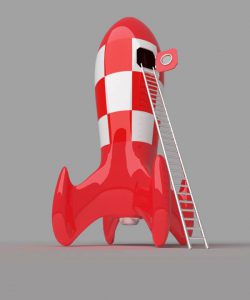